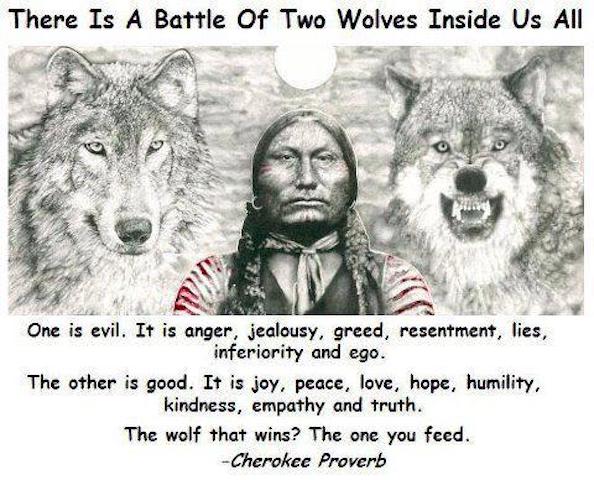 "Florida was purchased; treaties with the Florida Indians were made and violated;
gross frauds were perpetrated; dishonorable expedients were resorted to, and
another war provoked. During its protracted continuance of seven years,
bribery and treachery were practiced towards the Exiles and their allies, the Seminole Indians;
flags of truce were violated; the pledged faith of the nation was disregarded....

"Men who wielded the influence of Government for the consummation of these crimes,
assiduously labored to suppress all knowledge of their guilt; to keep facts from the popular mind;
to falsify the history of current events, and prevent an exposure of our national turpitude......"

Treat the earth well: it was not given to you by your parents,
it was loaned to you by your children.
We do not inherit the Earth from our Ancestors,
we borrow it from our Children.

We are more than the sum of our knowledge,
we are the products of our imagination. "

Although we are in different boats you in your boat
and we in our canoe we share the same river of life.

"We are not myths of the past, ruins in the jungle,
or zoos. We are people and we want to be respected,
not to be victims of intolerance and racism.

"We are now facing a difficult situation in Peru, where there
are attempts to cut back the territorial rights of the indigenous peoples,
including moves to divide, fragment and privatise our communal organisations.
Now more than ever, it is a matter of urgency for us to consolidate
our own indigenous alternatives for development."

The forest is not a resource for us, it is life itself.
It is the only place for us to live.

Although wrongs have been done me I live in hope. I have not got two hearts…
Now we are together again to make peace. My shame is as big as the earth,
although I will do what my friends advise me to do. I once thought that
I was the only man that persevered to be the friend of the white man,
but since they have come and cleaned out our lodges, horses,
and everything else, it is hard for me to believe white men anymore.

"A wee child toddling in a wonder world, I prefer to their
dogma my excursions into the natural gardens where the voice
of the Great Spirit is heard in the twittering of birds, the rippling
of mighty waters, and the sweet breathing of flowers.
If this is Paganism, then at present, at least, I am a Pagan."

"Peace and happiness are available in every moment.
Peace is every step. We shall walk hand in hand.
There are no political solutions to spiritual problems.

Remember: If the Creator put it there, it is in the right place.
The soul would have no rainbow if the eyes had no tears."

Tell your people, that since we were promised we should
never be moved, we have been moved five times.

"The death of fear is in doing what you fear to do."

"If you live on this land, and you have ancestors sleeping in this land,
I believe that makes you a native to this land.
It has nothing to do with the color of your skin.
I was not raised to look at people racially.
What I was taught is that we're flowers in the Great Spirit's garden.
We share a common root, and the root is Mother Earth."

"I have Indian Blood in me. I have just
enough white blood for you to question my honesty!"

"When it comes time to die, be not like those whose hearts are
filled with the fear of death, so when their time comes they weep
and pray for a little more time to live their lives over again in
a different way. Sing your death song, and die like a hero going home." 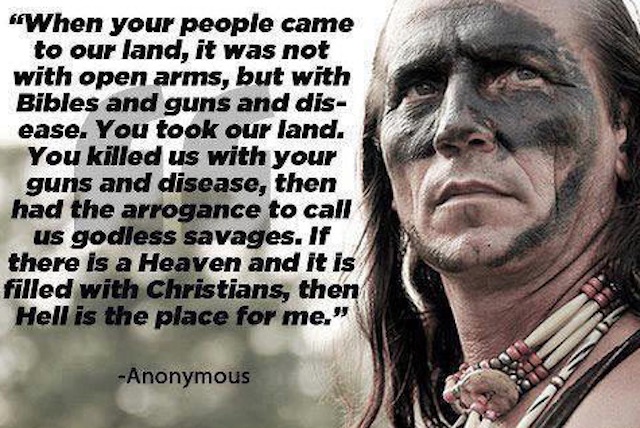 "The white people who are trying to make us over into their image,
they want us to be what they call assimilated, bringing the Indians
into the mainstream and destroying our own way of life and our
own cultural patterns. They believe we should be contented
like those whose concept of happiness is materialistic
and greedy, which is very different from our way.

We want freedom from the white man rather than to be integrated.
We don't want any part of the establishment, we want to be free
to raise our children in our religion, in our ways, to be able
to hunt and fish and to live in peace. We don't want power,
we don't want to be congressmen, bankers, we want to be ourselves.
We want to have our heritage, because we are the
owners of this land and because we belong here.

"A treaty, in the minds of our people, is an eternal word.
Events often make it seem expedient to depart from the pledged
word, but we are conscious that the first departure creates a
logic for the second departure, until there is nothing left of the word."

"Traditional people of Indian nations have interpreted
the two roads that face the light-skinned race as the road to
technology and the road to spirituality. We feel that the
road to technology.... has led modern society to a damaged
and seared earth. Could it be that the road to technology
represents a rush to destruction, and that the road to
spirituality represents the slower path that the traditional
native people have traveled and are now seeking again?
The earth is not scorched on this trail. The grass is still growing there."

"When we Indians kill meat, we eat it all up. When we dig roots,
we make little holes. When we build houses, we make little holes.
When we burn grass for grasshoppers, we don't ruin things.
We shake down acorns and pine nuts. We don't chop down the trees.
We only use dead wood. But the white people plow up the
ground, pull down the trees, kill everything. ...
the White people pay no attention. ...
How can the spirit of the earth like the White man? ...
everywhere the White man has touched it, it is sore."

"If today I had a young mind to direct, to start on the journey
of life, and I was faced with the duty of choosing between the
natural way of my forefathers and that of the... present way of
civilization, I would, for its welfare, unhesitatingly set that
child's feet in the path of my forefathers. I would raise him to be an Indian!"

"We learned to be patient observers like the owl.
We learned cleverness from the crow, and courage from the jay,
who will attack an owl ten times its size to drive it off its territory.
But above all of them ranked the chickadee because of its indomitable spirit." 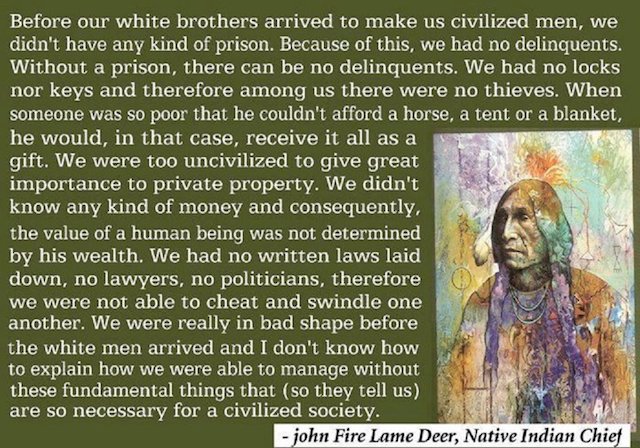 "We know our lands have now become more valuable.
The white people think we do not know their value; but we
know that the land is everlasting, and the few
goods we receive for it are soon worn out and gone."

"Once I was in Victoria, and I saw a very large house.
They told me it was a bank and that the white men place their
money there to be taken care of, and
that by and by they got it back with interest.

"We are Indians and we have no such bank; but when we
have plenty of money or blankets, we give them away to
other chiefs and people, and by and by they return them
with interest, and our hearts feel good. Our way of giving is our bank."

"Your emperor may be a great prince; I do not doubt it, seeing
that he has sent his subjects so far across the waters; and I am
willing to treat him as a brother. As for your pope of whom
you speak, he must be mad to speak of giving away countries
that do not belong to him. As for my faith, I will not change it.
Your own God, as you tell me, was put to death by the very men
He created. But my God still looks down on His children."

Atahualpa, Inca Chief (On hearing Pope Alexander
VI had declared Peru to be a possession of Spain.)

The word Inca means "Children of the Sun".

"Sukay" is a Quechua word meaning

'to open the earth and prepare it for planting'."

"My father, you have made promises to me and to my children.
If the promises had been made by a person of no standing,
I should not be surprised to see his promises fail.
But you, who are so great in riches and power;
I am astonished that I do not see your promises fulfilled!

"I would have been better pleased if you had never made
such promises than that you should have made them and not performed them. . ." 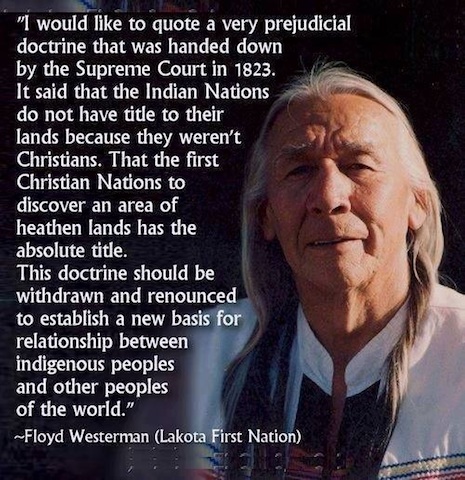 "In an eagle there is all the wisdom of the world."

"For a long time I have been walking and seeing
nothing. Now I find this song and it cheers me."

"There are many things to be shared with the Four Colors
of humanity in our common destiny as one with our Mother the Earth.
It is this sharing that must be considered with great care by the
Elders and the medicine people who carry the Sacred Trusts,
so that no harm may come to people through
ignorance and misuse of these powerful forces."

Resolution of the Fifth Annual Meetings of the Traditional Elders Circle, 1980

I know that all must be brought into the Sacred Hoop for it to be mended.
I often wonder how we will bring those who do not see even
the simplest of Circles into the greatest Circle of all.
Then I remember it is a thing that has been promised by Spirit.
That is how I know it will come to be.