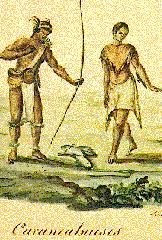 The Karankawa Indians were a group of Indian Tribes that lived along the Texas Coast. Ironically, by the year 1860, on the eve of the American Civil War, they had been completely exterminated. There are lagoons, or bays, spread out along the Texas Coast where the Karankawa made their camp sites; mainly because the bottoms were mostly smooth and the water was shallow. These waters enabled them to go out into the pools and in the clear, slowly ebbing water taking the fish and oysters they desired. 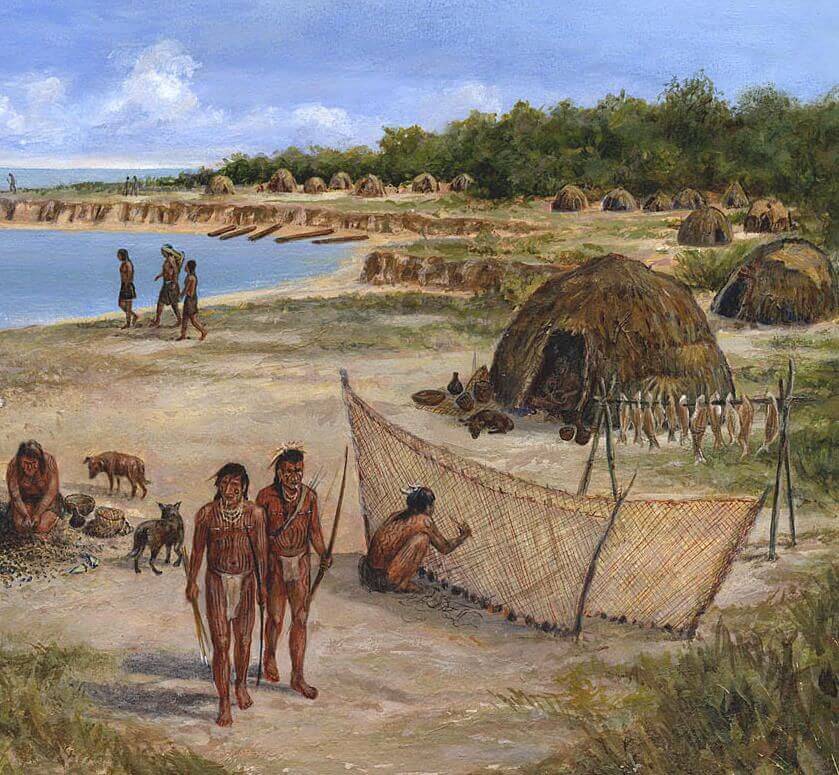 THE KARANKAWAS inhabited the Gulf coast from Galveston down to Corpus Christi, mainly coastal prairie grassland, cut by streams and occasional forests. Cabeza de Vaca described the Karankawas as tall (6 ft common), well-built, muscular, the men stark naked, with lower lip and nipples pierced, covered in alligator grease (against mosquitos), happy and generous, with amazing physical prowess. "... they go naked in the most burning sun ....- in winter they go out in early dawn to take a bath ... breaking the ice with their body...". With cedar bow and arrow: "... aimed at a bear in the top of a tree ... the arrow went through the body and was propelled 40 to 50 yards beyond ..."; "though impelled nearly 200 yards, the arrows were driven to the feather in the alluvial bank."

From the gulf waters - using dugout canoes - they took oysters, clams, scallops, mollusks, turtles, fish, porpoises, alligators and underwater plants. Deer were hunted, occasional buffalo, bear, peccary, smaller mammals, ducks. Berries, nuts, seeds and other plants were gathered. No foods were continously plentiful, when the harvest was good they gorged at repletion. "unique in their gluttony .... they eat locusts, lice, even human flesh ... raw meat, bear's fat .... passion for spoiled food ...". In spring they might subsist exclusively on oysters, "then for a month they ate blackberries".

Fires for cooking were built in willow pole shelters. Trade with the inland tribes: conch shells in exchange for skins, red ocher, flint, and deer hair (for tassels).

The now-extinct Karankawa Indians played an important role in the early history of Texas. The name Karankawa became the accepted designation for several groups or bands of coastal people who shared a common language and culture. Those bands, identified in early historic times, included the Capoques (Coaques, Cocos), Kohanis, Kopanes (Copanes), and Karankawa proper (Carancaquacas). They inhabited the Gulf Coast of Texas from Galveston Bay southwestward to Corpus Christi Bay. All spoke a little-known language called Karankawa, and only about 100 words of that language have been preserved. The significance of the name Karankawa has not been definitely established, although it is generally believed to mean "dog-lovers" or "dog-raisers." That translation seems plausible, since the Karankawas reportedly kept dogs that were described as a fox-like or coyote-like breed. The Karankawas were poorly equipped, nomadic people who migrated seasonally between the barrier islands and the mainland. Their movements were dictated primarily by the availability of food and secondarily by climate. They obtained food by a combination of hunting, fishing, and gathering. Fish, shellfish, and turtles were staples of the Karankawa diet, but a wide variety of animals and plants contributed to their sustenance. 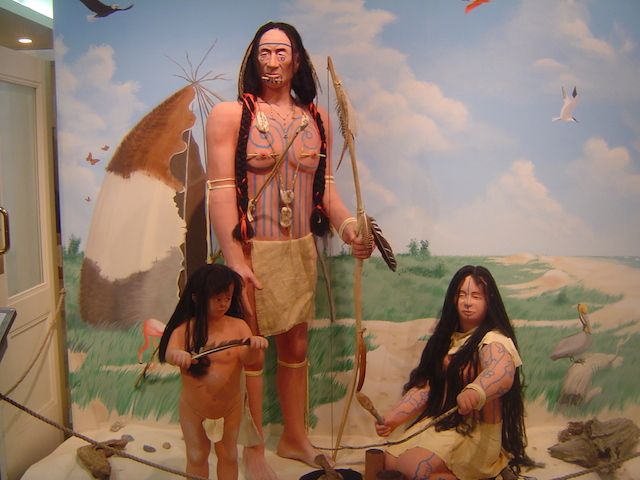 The first of the Europeans to encounter the Karankawa were the Spaniards. A group led by Panfilo de Narvaez left Spain in 1527, sent by Charles V to conquer and settle Florida. He reached the Florida west Coast near Tampa Bay in April 1528. Narvaez split his forces into two groups, one by sea and the other by land to Appalache. Alvar Nunez Cabeza de Vaca was treasurer of the expedition, which was the inland party and who disagreed with the split. Narvaez marched inland where his forces suffered from Indian attacks and lack of food. When the land force did not appear on schedule, the ships sailed away back to Spain, leaving Narvaez and Cabeza de Vaca stranded. The expedition built crude boats to carry them to Panuco in Mexico. The year was still 1528 when they set out to Mexico with about 100 men. They met with rough water where Narvaez was washed out to sea in a storm near the south Texas Coast. The boats ran aground on the island of Malhado near the present day Galveston, Texas, with about 80 survivors. The Spaniards began on the Texas Coast with a cold winter, raw enough to kill all but fifteen men. Those who survived turned to and devoured the corpses of their dead. The accounts of what happen rest with Cabeza de Vaca, simply because he lived to tell the story. He resided on Malhado for a time, then escaped to the main land, where hewas a trader and a slave of the Karankawa.

The problem he had with the Karankawa is they would alternately love and despise him, depending on their mood. In February 1529 the Indians, probably the Coco tribe, which had Cabeza de Vaca in tow, moved inland from Malhado Island. The drinking water was bad, there was little fire wood, and the mosquitoes were in heavy concentrations,but the Oysters were abounded in the bays. Cabeza de Vaca's life was made miserable due to the fact he was forced to work hard pulling eatable roots from the water and Canes where they grew. His fingers became tender and would bleed. Cabeza de Vaca said that these were the cruelest Indians he met. It was here he fell ill. When he regained his strength he escaped to the Charruco tribe. This Tribe he said was much kinder than the Coco. He reported that although theCoco was cruel to him, they were furious at the Spaniards for eating human flesh the winter of 1528 and he said he saw no Cannibalism in the Natives. Cabeza de Vaca noted their love for their children. When a child died, the entire village would weep for a hold year, three times each day, then wash and purify themselves in charcoal paint. In October 1534 Cabeza de Vaca escaped from the Karankawa, accompanied by Andres Dorantes de Carranza, Alonso de Castillo Maldanado, and the Negro, Estevanico. The group slowly made there way west to Mexico. For over a hundred and fifty years the Karankawa were left alone, until 1685 when Rene Robert Cavelier, Sieur de La Salle landed in Karankawa Country. 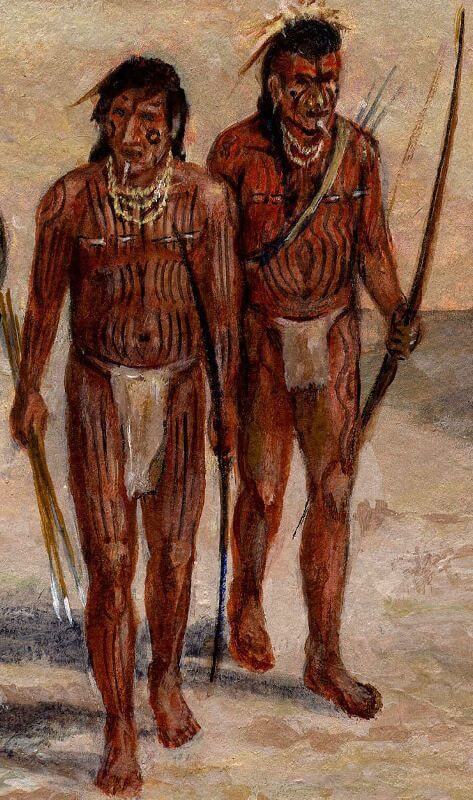 The Karankawa had a strong love and affection for their children. When a child died the entire Tribe mourned for a year, at dawn, noon, and sunset they performed their mourning rite. If a Son or Brother died the family would mourn for a month, and remain in seclusion, refusing to get food. Other Tribe members would bring eatables to the family. This practice could have been carried to the extremes if a member in every family would have died. There is little known about the Karankawa Religious beliefs except for their festivals and Mitote, a ceremony performed after a great victory in battle. The festivals were performed during a full moon, after a successful hunting or fishing expedition in a large tent with a burning fire in the middle.

The Karankawa lived along the "coastal bend" of Texas. Look at this map first. The coastal bend starts at the west end of Galveston Island and extends southwest down to Corpus Christi. It has several large, shallow bays that reach miles inland and long narrow barrier islands that protect lagoons between the islands and the mainland. (You better look up what a barrier island is and what a lagoon is if you don't know. Or, ask your teacher. That will make your teacher glad that you asked such a good question ;-) The Karankawa lived around these bays and along the lagoons, mostly in the winter. These bays and lagoons supported a rich variety of wildlife. There were many kinds of fish and oysters in the salt water and brackish water. Most of these bays have large rivers that empty into them, such as the Colorado and the Guadalupe. There are also many large creeks in the coastal bend along with swamps and bayous and wetlands. There are many kinds of ducks and waterfowl in this environment. Alligators and large turtles are also found in wetlands and swamps and are good to eat. Just inland there are deer and turkey along with rabbits. In the spring and early summer there are blackberries and many other kinds of plants and roots to eat.

(Best resources on the Internet) 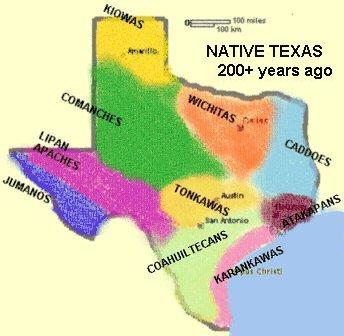 
A term that seems to have the Brazos in 1823 began the decline of been given originally to a small tribe near the tribe near Matagorda Bay, Texas, but its application has been extended to include a number of related tribes between Galveston Bay and Padre Island.  The signification of the name has not been ascertained.  Although the linguistic material obtained is not sufficient to show positive relation to any other language, there are very strong indications of affinity with the dialects of the Pakawa group, Pakawa Comecrudo, and Cotonam, still recognized as a part of the Coahuiltecan family. On the other side they were probably connected with the Tonkawa. If any of the coast tribes mentioned by Cabeza de Vaca was identical with the Karankawa, which is not unlikely, it is impossible to determine the fact. The first positive notice of them is found in the accounts of La Salle’s ill-fated visit to that section.