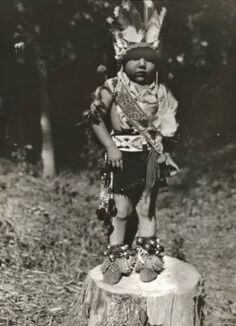 Many, many years ago, a young Winnebago Indian orphan boy lived in a small village with his grandmother. He found a friend about his own age. One day, they hunted for hickory wood to make bird arrows, which they used for hunting hawks. Orphan-Boy captured a young pigeon hawk and took it home. Soon, it became his pet bird.

When the pet hawk became fully grown, Orphan-Boy suggested that it might want to go away and make a life for itself. So he tied another tobacco bundle around the pigeon hawk's neck, thanking him for staying with him for so long a time. Immediately, the bird flew away and never returned to Orphan-Boy.

Another day, Orphan-Boy and his friend hunted for dogwood to make pointed arrows. They accidentally became separated in a low fog. From above, however, a bad Thunderbird saw Orphan-Boy and swooped down, seizing him in his claws. The huge bird carried him away to its home in the high mountains.

For a long, long time the friend looked for Orphan-Boy. Finally, he gave up searching far and wide. But every day, he faithfully returned to the place where Orphan-Boy had disappeared, mourning still for his lost companion.

When the bad Thunderbird reached its mountainous home, he and his friends tied Orphan-Boy down to the floor. Their purpose was to hold him there until nothing remained in his stomach. Then they planned to devour him.

Little pigeon hawk decided to go and have a look at Thunderbird's prisoner. Imagine his surprise to find that Orphan-Boy, his kind friend, was the prisoner.

Little pigeon hawk left and decided to hunt for some young birds and roast them. Later, he returned, putting some of the meat under his wings and secretly dropping it into Orphan-Boy's mouth. Every day little pigeon hawk brought meat for Orphan-Boy, until the thunderbirds became suspicious of pigeon hawk.

The next day, the bad thunderbirds decided to exclude little pigeon hawk when he came to visit Orphan-Boy. One thunderbird pushed him toward the door, but little pigeon hawk accidentally on purpose fell close to the fire and scorched some of his feathers. He made a great noise and commotion, running to his big brother, Big Black-Hawk, who was Chief of the Thunderbirds.

"What can the matter be, little brother?" asked the Chief. Little pigeon hawk told his big brother the whole story from the beginning. When the Chief heard all, he became very angry.

Immediately, he went to the place where Orphan-Boy was still held down to the floor. The Chief scolded the bad thunderbirds for their wrongdoing. Because they had pushed little pigeon hawk too close to the fire, the Chief announced they could no longer keep Orphan-Boy as their prisoner. Chief Big Black-Hawk cut the ropes and took the freed young boy home with him.

Before winter weather arrived, Chief Big Black-Hawk informed his little brother that it would be better for Orphan-Boy to return to his own people.

"He does not belong up here with the Thunder Spirits, and I do not think Mother Earth Spirit will approve of it," said the Chief.

Little pigeon-hawk took Orphan-Boy back to the very place from where he had disappeared a long time ago. That evening, Orphan- Boy's old faithful friend came as usual to that place and found Orphan-Boy had returned! How surprised and delighted both boys were to see each other again. Orphan-Boy told his old friend everything that had happened to him since he had been kidnapped by the Thunderbird.

A thanksgiving feast was prepared by the grandmother for both families to celebrate the happy homecoming of the boy stolen by the Thunderbird. From that time forward, Orphan-Boy and his faithful friend had many happy hunting times together, trying never to be separated again.