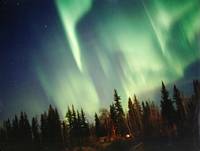 Legends and Folklore of the Northern Lights

The aurora borealis has intrigued people from ancient times, and still does today. The Eskimos and Indians of North America have many stories to explain these northern lights.

One story is reported by the explorer Ernest W. Hawkes in his book, The Labrador Eskimo:

The Point Barrow Eskimos were the only Eskimo group who considered the aurora an evil thing. In the past they carried knives to keep it away from them.

The Fox Indians, who lived in Wisconsin, regarded the light as an omen of war and pestilence. To them the lights were the ghosts of their slain enemies who, restless for revenge, tried to rise up again.

The Salteaus Indians of eastern Canada and the Kwakiutl and Tlingit of Southeastern Alaska interpreted the northern lights as the dancing of human spirits. The Eskimos who lived on the lower Yukon River believed that the aurora was the dance of animal spirits, especially those of deer, seals, salmon and beluga.

Most Eskimo groups have a myth of the northern lights as the spirits of the dead playing ball with a walrus head or skull. The Eskimos of Nunivak Island had the opposite idea, of walrus spirits playing with a human skull.

The east Greenland Eskimos thought that the northern lights were the spirits of children who died at birth. The dancing of the children round and round caused the continually moving streamers and draperies of the aurora.

Fires in the North

The Makah Indians of Washington State thought the lights were fires in the Far North, over which a tribe of dwarfs, half the length of a canoe paddle and so strong they caught whales with their hands, boiled blubber.

The Mandan of North Dakota explained the northern lights as fires over which the great medicine men and warriors of northern nations simmered their dead enemies in enormous pots. The Menominee Indians of Wisconsin regarded the lights as torches used by great, friendly giants in the north, to spear fish at night.

An Algonquin myth tells of when Nanahbozho, creator of the Earth, had finished his task of the creation, he traveled to the north, where he remained. He built large fires, of which the northern lights are the reflections, to remind his people that he still thinks of them.

All of the Aurora images on this page are copyrighted (2003 Jan Curtis) and are intended for non-commercial, educational uses. Larger versions of these photos and many others can be viewed from Jan Curtis homepage, Home of the Northern Lights.